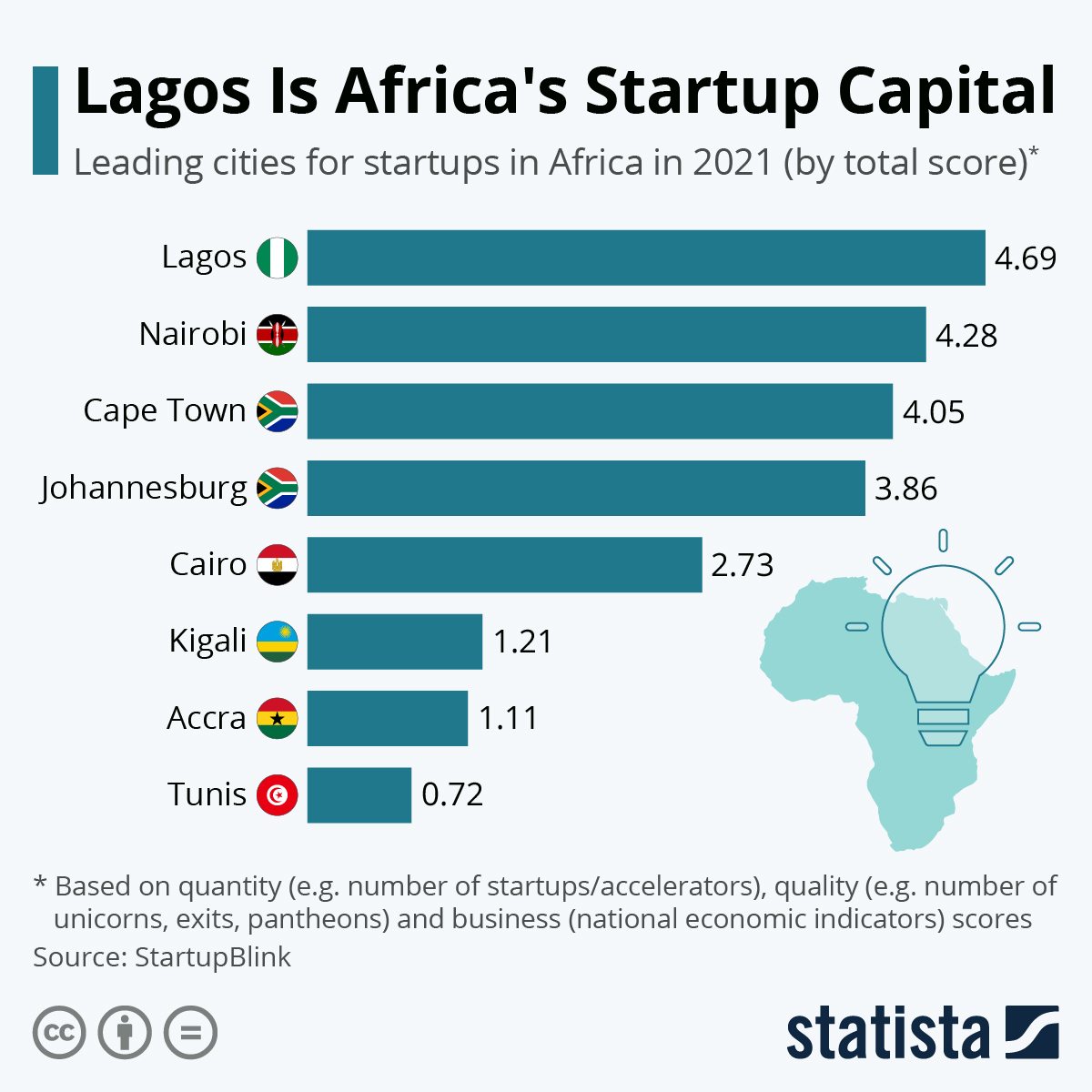 When it comes to attractiveness for startups, Lagos leads the ranking of African cities according to data by StartupBlink. The Nigerian capital managed to outperform its direct competitors Nairobi, Cape Town and Johannesburg in 2021, a trend that is likely to continue. These scores are the exception rather than the norm though. As our chart shows, African cities still have room to improve in terms of sowing the seeds for future startup growth.

Overall, only seven African cities had a score of more than 1.0 points on StartupBlink’s index for 2021, with the urban areas claiming the top spots coming as no surprise. Lagos, for example, is not only the biggest metropolitan area in Africa but has also made a name for itself as a tech hub rapidly advancing towards a 24-hour economy, generating ten percent of Nigeria’s total GDP of $432.3 billion. Nairobi, the second-highest rated African city in 2021, is home to the African headquarters of global heavyweights like Cisco, IBM, Coca-Cola and Google, a fact at least in part attributable to its reputation as a tourism as well as a financial hotspot. In terms of homegrown achievements, institutions like the Nairobi Securities Exchange, one of the biggest African stock exchanges, and companies like SafariCom, which boasted a market cap of $15.3 billion in November 2021, make Nairobi fertile ground for investors.

Cape Town and Johannesburg, on the other hand, are still profiting from the economic standing of South Africa, which led all African countries in terms of GDP for decades. Notable companies include Cape Town’s Naspers, whose valuation of $104 billion in July 2021 made it the largest company on the continent by a wide margin. As data from African Business shows, eight of the ten highest-valuated African companies as of July 2021 were located in South Africa

February 18, 2022
African fintech Flutterwave triples valuation to over $3B after $250M Series D

You may have missed

June 25, 2022
Pakistani Marketplace For Small Stores Tajir Raises $17 Million In A Series A Round Led By Kleiner Perkins

February 18, 2022
Why now may be the ‘golden age’ for Southeast Asia start-ups and where the opportunities lie